“All versions of this deadly virus are highly contagious, and it’s important that as we head into the final stretch, Coloradans make an even greater effort to wear masks around others, socialize only with people in their household, and stay at least six feet from others when out. The fact that we were able to detect this as quickly as we did truly speaks to the incredible work of the exceptional scientists and staff in our lab,” Governor Polis said. “While we are the first to confirm a case of this variant strain, it’s unlikely that this is truly the first case of this nature in the United States, and in the days and weeks ahead, scientists will determine how widespread it is. It’s not uncommon for a virus to mutate or change, and some early evidence from the United Kingdom shows that this variant may spread more quickly,” the Governor said.

“The CDC and scientists in England, where this variant is believed to have originated, continue to emphasize that the very same things we are doing to slow the spread of the virus now, are just as important, if not more so. Coloradoans must continue to wear a mask, stay at least 6ft away from others, avoid gatherings with those outside your home, and wash your hands regularly with soap and water,” the Governor said.

The identified case involves a person in his 20s who was working at a facility in Elbert County and has not recently traveled. This individual is currently recovering and in isolation. The new strain found in Colorado is the same strain identified in the United Kingdom, known as B.1.1.7. The state is also investigating a second sample that was identified as a possible B.1.1.7 strain, but the sequence of that case has not been confirmed. This individual is also in isolation.

The Governor reminded Coloradans that New Year celebrations should only occur between those in their immediate household. “2021 is bound to be a better year than 2020 was but to make that a reality, we must celebrate the New Year responsibility,” the Governor said.

The Governor also provided an update on the state’s most recent COVID numbers and announced that Colorado is updating its vaccine distribution phasing and entering Phase 1B.

With this new update, Governor Polis explained that Phase 1B also now covers Coloradans 70 and older, who represent 78% of all COVID deaths in our state. Coloradans age 70 and older will have the opportunity to begin getting vaccinated in the next few days, as supplies allow. The state is moving as fast as the federal supply chain allows and actively onboarding more providers throughout the state.

Additionally, the Governor explained that entering this new phase also includes frontline essential workers and continuity of state government, which will include the following groups:

NOTE: This image has been updated since the press conference. To correct Phase 2, as the Governor mentioned it includes people 60-69 and the image previously said 65-69. 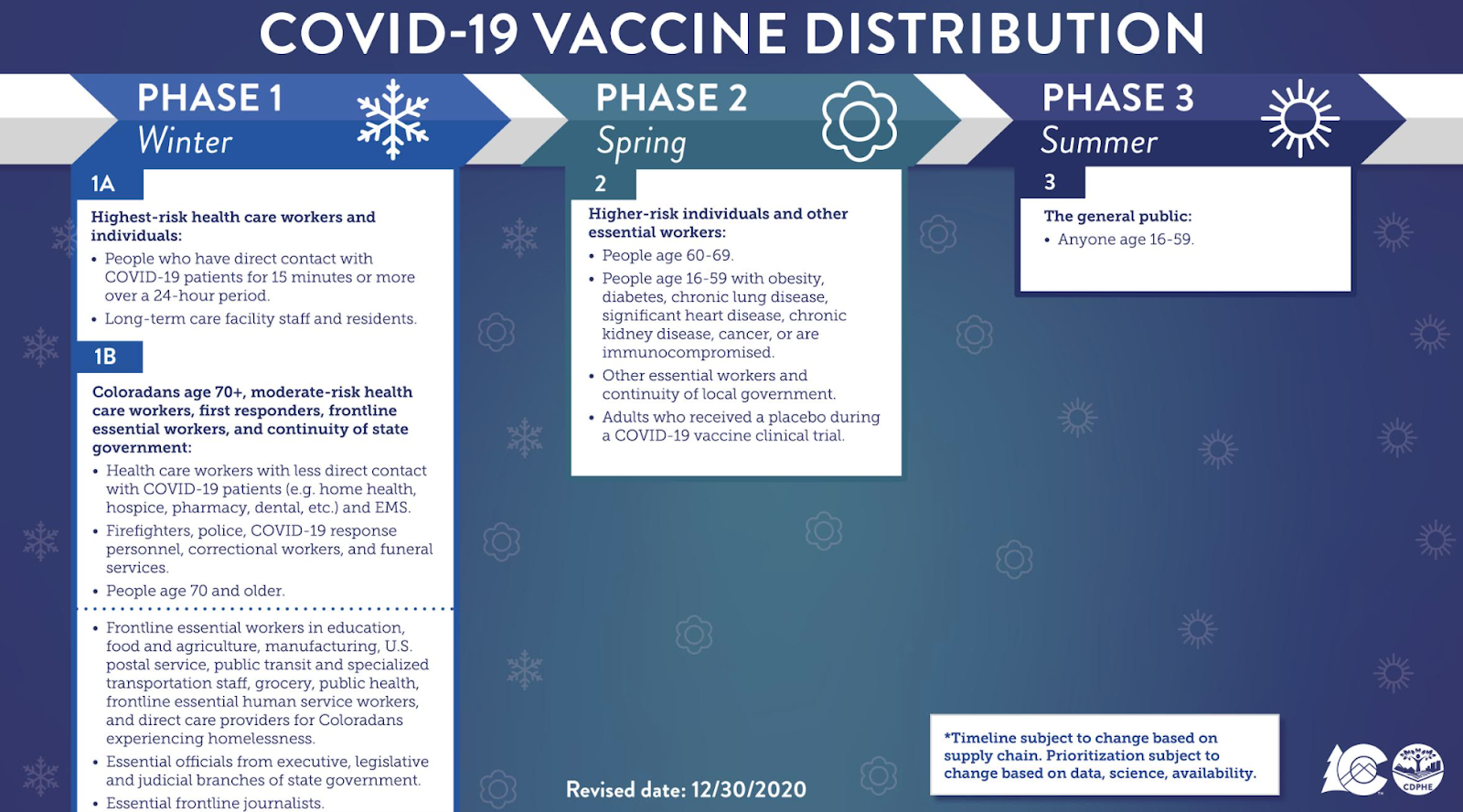