DENVER - Governor Jared Polis today signed an Executive Order granting pardons to those who have been convicted of possessing one ounce or less of marijuana. In June, Gov. Polis signed the bipartisan H.B. 20-1424, sponsored by Rep. James Coleman, Sen. Julie Gonzales and Sen. Vicki Marble, including an amendment sponsored by Sen. Gonzales, which authorizes the Governor to grant pardons to a class of defendants who were convicted of the possession of up to two ounces of marijuana. Reps. Leslie Herod and Jonathan Singer were also champions of passing this legislation. The new law went into effect this month.

“We are finally cleaning up some of the inequities of the past by pardoning 2,732 convictions for Coloradans who simply had an ounce of marijuana or less. It’s ridiculous how being written up for smoking a joint in the 1970’s has followed some Coloradans throughout their lives and gotten in the way of their success,” said Governor Jared Polis. “Too many Coloradans have been followed their entire lives by a conviction for something that is no longer a crime, and these convictions have impacted their job status, housing, and countless other areas of their lives. Today we are taking this step toward creating a more just system and breaking down barriers to help transform people’s lives as well as coming to terms with one aspect of the past, failed policy of marijuana prohibition.”

This pardon applies to state-level convictions of possession for one ounce or less of marijuana, as identified by the Colorado Bureau of Investigation (CBI).  Under H.B. 20-1424, the Governor is granting pardons for a class of people with convictions for possession of one ounce or less of marijuana. The individuals who have these convictions did not need to apply for pardons, and the Governor’s Office has not conducted individual assessments of the people who have been pardoned through this process. Individuals convicted of municipal marijuana crimes, or individuals arrested or issued a summons without a conviction, are not included in the pardons. 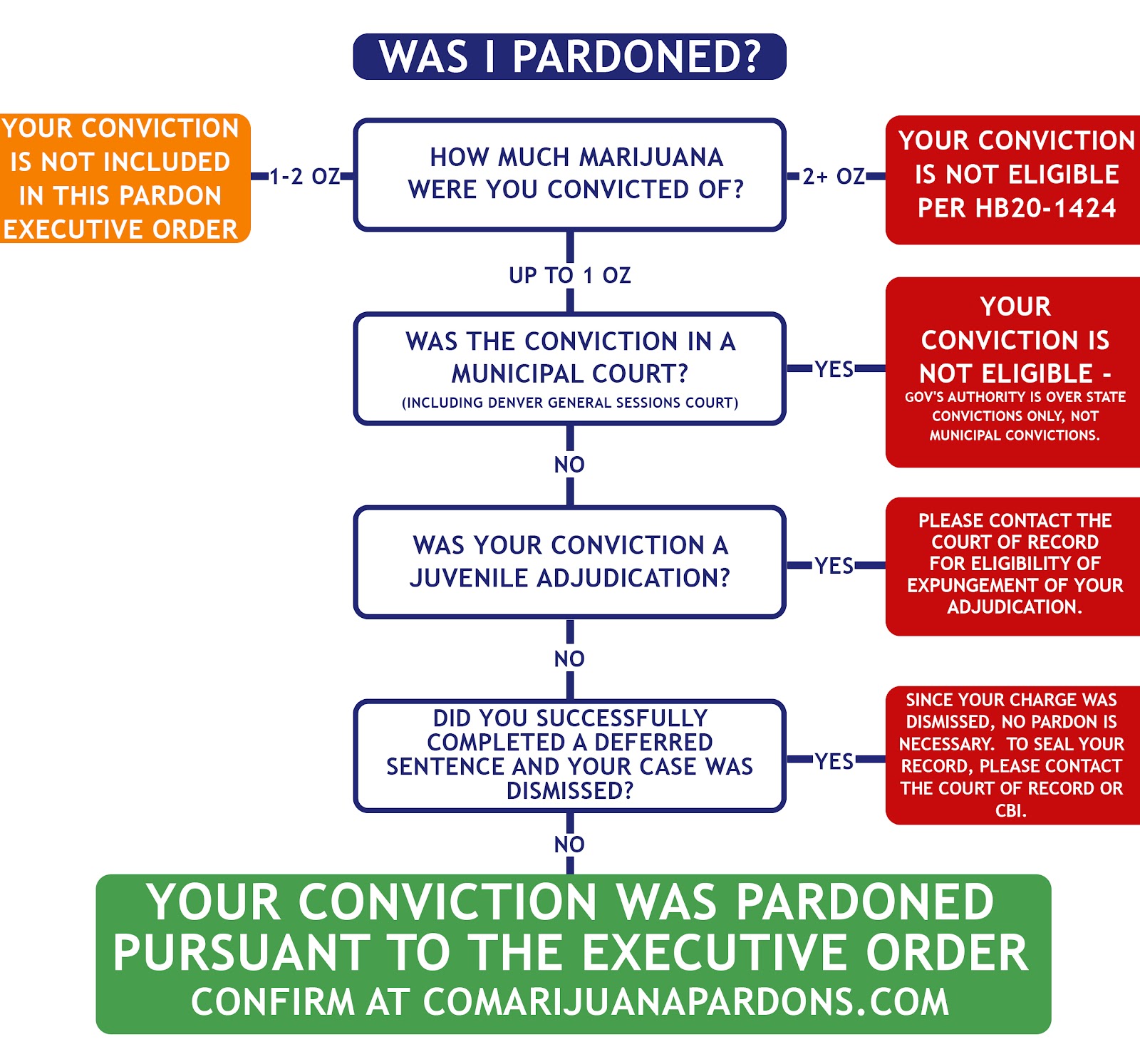 Individuals who are unsure whether a conviction on their record has been pardoned may fill out a form to request confirmation of a pardon on the Colorado Bureau of Investigations website. To obtain their entire criminal history, people can visit CBIRecordsCheck.com. Once a conviction is pardoned, it will not appear on a criminal history obtained on the records check website.